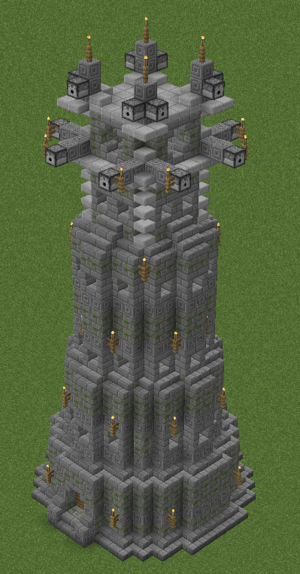 The arrow tower is the fundamental defensive tower for towns. It is safe and cost effective, however it may not deter a large group of enemies. It can be defeated by enemies with a lot of time on their hands, since they could build tunnels and/or trenches towards the tower, shielding themselves from the arrows. The Arrow Tower automatically fires upon players who are outlaws or members from hostile or at war city-states/civilizations.

Single enemies can be outlawed in your Town and be shot by the Arrow Tower with the /town outlaw add <NAME> command.

Entire Civilizations can also be fired upon by your entire civilization's defenses by declaring their civilization HOSTILE!