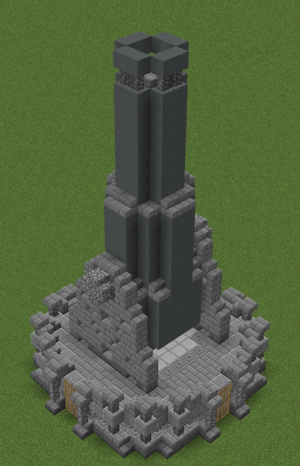 The Artillery Tower is a fundamental defensive tower for civilizations and residents alike, The Artilery Tower automatically fires upon players who are outlaws or members from hostile or at war city-states/civilizations. It is safe and cost effective, however it may not deter a large group of enemies, with the correct placement and consideration, this Tower can be the ultimate defense when fighting all out warfare in significant locations, Defending Wonder Towns or Capitols.

The tower has a default range of 300 blocks. The technical range is is sqrt(x^2 + y^2 + z^2) where x, y, and z are the difference between the artillery tower's nearest "fire point" and the player. Additionally, multiple Artillery Towers must be built a minimum of 300 blocks away from each other.

Single enemies can be outlawed too your personal Artillery tower with the /civ outlaw add <NAME> command.
Entire Civilizations can be fired upon by your entire civilization's defenses by declaring their civilization HOSTILE.