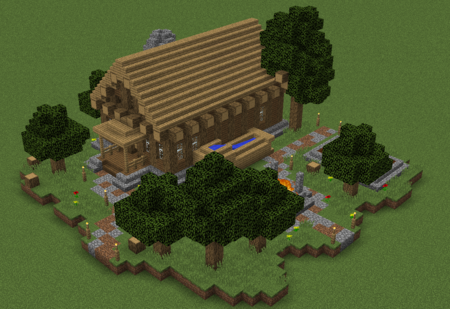 The Camp is a special structure that allows players to deploy a cheap, semi-safe, temporary shelter while saving up the coins to make a civilization or while searching for one to join. The camp contains a Longhouse with a door that can only be opened by members of the camp, a small Garden capable of growing crops, and a small machine called a Sifter which acts like a smaller version of the Trommel. Players are limited to one camp per player at any one time, and players cannot be a member of a camp and a town at the same time. The leader of the camp may invite others to their camp, granting them access to the camps garden, sifter, and longhouse.

The longhouse contains an enderchest which allows individual residents to keep their valuables safe from outsiders, as well as other camp mates. Inviting new untrusted members to your camp is a great way to get to know them, without exposing yourself to too much risk. You can use camps as a staging ground to weed out the bad eggs and keep the best, most productive members to be your future civ mates! Choosing your camp members is still very important, as you'll need people whom you can trust to help you work towards your goal, while not drawing too much attention to your camp's location.

All camps should be considered temporary. Camps can be destroyed by either raiding parties, or by new civs being founded near or on-top of your camp. Because of this, you should not invest too much time into your camp; consider it a very temporary living situation at all times.

Notice: Your first camp is free with token given at start, icon is a Door.

Block protection: Only blocks in the camp template are protected. Any blocks placed by players are not!

Control blocks: There is only one control block, which has 100/100 HP.

PVP is enabled inside the camp, so you must be cautious of strangers who enter your camp uninvited. The longhouse inside the camp will protect you, as long as your door is closed. Nobody can access the door to the longhouse, except camp members; so it can be used for safety against unwanted guests, assuming they don't attempt to destroy your camp's Control Block.

Camps can be raided during each camp's raid time. The raid time of every camp is 2 hours long, and is set based on the time the camp was built. If a camp is constructed at 6:00pm, then the camps raid time will be 6:00pm everyday and will last for 2 hours. When first built, a camp cannot be raided for at least 18 hours. The raid time of a camp is announced when any player attacks the camp's control block. Members of the camp can view the camp's raid time using the command: "/camp info". The Control block is made of obsidian and has 20 hit points. If all 20 hit points are lost, the camp will be destroyed. If your camp has been destroyed by raiders, then you will need to construct a new camp at full price, including upgrades.

Using camps can be hugely helpful in saving up money for civs however, if you are not careful they can also be expensive. Due to camps size and unique shape they can draw large amounts of attention to your position, so it is wise to avoid building them in high traffic areas such as spawn and near large civs. You need to be especially careful not to place camps in spots that are coveted by new civs. If your camp is built in a nice spot that a civ leader wants, they can simply build on top of your camp and it will be destroyed. TLDR: When building a camp avoid high player traffic areas and always keep your most valuable items in the ender chest. Also, it may serve you good to place a ladder and make a room in the attic type area of the camp. This helps when you are forced to place chests that will be no protected. People often block glitch in the windows and open your unprotected chests and furnaces.